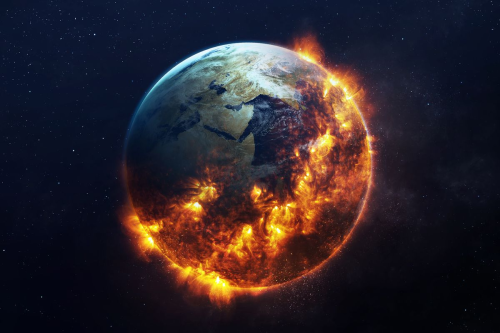 As a topic of discussion, climate change follows a very similar trend to the growth of human population: initially slow and scarce, then suddenly spreading exponentially in recent years. As more and more greenhouse gases are being released every day than almost all of human history combined,  the threat of an earth permanently suffering from its effects is a reality we now face.

Planet Earth is a large but precarious place to live. Our atmosphere is comprised mostly of nitrogen, oxygen, and argon, with 0.1% of the air made up of greenhouse gases. This may seem like a small fraction, but the smallest change on Earth can lead to the biggest consequences. Knowing the size of our atmosphere as well, that is a lot, especially considering the heating capabilities of these gases. This fraction of a percent is causing the Earth’s temperature to rise, slowly but surely. If the average world temperature were to rise even 2℃ more, the results would not only be catastrophic, but irreversible.

This is the exact path we are heading towards, today.

In a recent study by the Earth System Dynamics of the European Geosciences Union, depending on how fast countries favour renewable energy over fossil fuels to power their economies within the next 135 months (11 years and 3 months), we could reach a point of climate change so potent and drastic that human extinction would be inevitable. Yes, I know I just said something straight out of a bad sci-fi novel, but this is not fiction. This is not fun. This isn’t Eco Rangers anymore. This isn’t a hoax by China. Earth is dying, and we, the corporation and the consumer, are its killers.

EGU-ESD estimates that the year we reach the point of no return (PNR)could be anytime from 2035 to 2042, perhaps even as soon as 2022. You know what’s crazy about these years? They’re all within our lifetime. We won’t reach retirement age without the Earth on its last wits. Heck, we’ll barely be starting our careers.

We’re running out of time.

Students of Milton District, our entire lives, we’ve been raised being told we can change the world. What if there’s no world to change? Our futures -the very thing bringing us here, to school, every day- are in jeopardy.

This is the point where I would tell you to go green, to be kinder to Mother Earth by turning off lights you don’t need, but we are far, far past that point of saving. Even if all of Milton District were to become solar-powered waste-not-want-not rainforest activists, which I’m definitely not condemning, there are still so many barriers we’ve built that are blocking the world from allowing the change to renewable resources on a global scale. Poverty, body-shaming, lack of adequate and affordable education, misogyny and racism even. All of these social issues and injustices that we need to fight against all have a hand, some way or another, in inducing consequences on the environment and the world, especially those concerning money and the economy. Do you want to know why? Do you want to know the truth of it all? We’re all dying, not only by our only wastage, but also because rich old CEOs refuse to let go of their foreign oil pumps, like petulant children who won’t let go of toys they’ve outgrown. Classic classism. The companies that benefit from producing these gases are the same companies who spend their soot-covered money to pay lobbyists and liars to tell the world that climate change is not an issue just so they can continue collecting their greens by killing our green. What kind of world do we live in? Meme accounts, out of all people on earth, take this issue more seriously than most governments.

How do we promote change now, when we need it more than ever? A person working towards stopping a force like, I’m very sorry to say, wouldn’t make a dent at this point. A whole school? We could start there.

If there was ever a time to become an activist, philanthropist, vegan, etc., start yesterday. Donate to charity to help remove global barriers, convince your parents to choose solar power instead of natural gas, join MD’s Eco club on Thursday in room 110, track and reduce your ecological/carbon footprint, and most of all, raise awareness like your life depends on it, because it does.

My intention here is not to dishearten you or make you feel like you are useless in the face of this disaster. Humans have not only the resources to track climate change, but to stop it as well. Just not all of us realize it. My intention here is to anger you. To motivate you. Because of the actions of the many before you, your futures are at risk. If you’re going to live for and fight for anything, let it be this. Fight for the world. Fight for your future, your life. This issues has been shunned, mocked, and ignored for so long it now threatens the very air we breathe. We are Generation Z, Milton District. We’re the end of the line unless we choose not to be. Please. I believe in us.