Following annual tradition, various music groups and extracurriculars at MD took to the road on December 3rd to continue this year’s Feeder School Tour. The Senior Concert Band, Foster’s Funk Band, and the A Capella group performed and promoted MD’s music program to elementary schools whose students are to attend MD in the coming years.

After Day 1 at Sam Sherratt and Brookville, Day 2 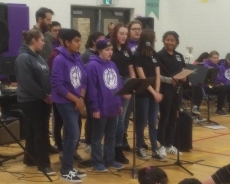 kicked off at W.I. Dick Middle School, where the beloved student rock band “The Hinatsu Experience” blew everyone away with strong vocals and radical guitar solos.

From there, MD visited Martin Street Public School, where students loved the Senior Concert Band’s renditions of Imagine Dragons’ “Believer” and Portugal. The Man’s “Feel It Still”. The band also put on an epic cover of Guns N’ Roses’ “Sweet Child o’ Mine”, earning a standing ovation from some enthusiastic Grade 8s.

Escarpment View Public School was the last stop—and MD worked hard to make it the best performance of the day. Their hard work definitely showed, and EVP students were amazed by the Jazz Band’s performance of Michael Jackson’s “Rock With You” and Foster’s Funk Band’s upbeat cover of Amy Winehouse’s “Valerie”, which included an impressive ending by vocalist Soham Sant.

All in all, it was another successful day of music-making by groups of talented and dedicated MD students. Way to go, guys!

Stay tuned to read about the final day of this year’s Feeder School Tour, where the bands will visit Anne J. MacArthur, Boyne, and P.L. Robertson Public Schools.

MD’s RECORD-BREAKING SUCCESS AT 2020 DECA PROVINCIALS⁣⁣⁣ ⁣⁣⁣ From Thursday, February 6, to Saturday, February 8, thousands of students competed at the DECA (Demonstrating Excellence Celebrating Achievement) Provincial Competition in Toronto. Over 50 students from Milton District High School participated in this important event under the direction of @deca.mdhs Advisor Mr. Paul Riggs and many brought home a reward for their hard work.⁣⁣⁣⁣⁣ ⁣⁣⁣⁣⁣ DECA is an international business club where students participate in oral case study presentations, business simulations, and written business reports.⁣⁣⁣⁣⁣ ⁣⁣⁣⁣⁣ Students start out at Regionals competing against other students from across their school board. Students who are successful at the Regional Competition then move on to compete at the Provincial Competition in February. Winners at Provincials move on to compete against the best in the world at Internationals, held this year in Nashville, Tennessee in April.⁣⁣⁣⁣⁣ ⁣⁣⁣⁣⁣ With over 40 categories in both written and oral events—and over 7000 students from all across Ontario—our Milton Mustangs had some tough competition.⁣⁣⁣⁣⁣ ⁣⁣⁣⁣⁣ With extreme dedication and long hours, many of the hardworking students at MD pulled all-nighters for a chance at Internationals. Special congratulations are given to those who earned medals at Provincials for their case study presentations and exams: Norhan Ahmadoun (Grade 9), Nora Draper (Grade 12), Rashmi Avudaiappan (Grade 12), Krithi Gowrishankar (Grade 12), Jasiya Janjua (Grade 12) and Saihaj Rehsi (Grade 12).⁣⁣⁣⁣⁣ ⁣⁣⁣⁣⁣ Milton District is sending an unprecedented TEN Provincial champions to Internationals this April in Nashville. Those ten members are Saad Fasihi, Zian Raheem, Ahmed Abdulrahman, Zayd Tahir, Riya Anadkat, Vignesh Marla, Jackson Shi, Areej Amjad, Maheerah Raja, and Jasiya Janjua.⁣⁣⁣⁣⁣ ⁣⁣⁣⁣⁣ The team would like to give a special thanks to Mr. Riggs, and the Chapter’s President, Tushar Atmakuru. Without their constant help, the team wouldn’t have been able to successfully run Milton District’s seventh year of DECA, and fourth year sending students to Internationals.⁣⁣⁣..⁣⁣ ⁣⁣⁣⁣⁣ READ MORE AT MUSTANGMESSENGER.CA⁣⁣
WHAT IS GOING ON?! ⁣ Hey Mustangs, you might've noticed a bunch of stories today promoting students who are running to become one of the HDSB's two Student Trustees. ⁣ Tonight is the nomination deadline and the election is February 25! We will tell you a lot more as the date approaches but here are some things to keep in mind: ⁣ All candidates will make a speech that will be livestreamed online on election night. ⁣ Following the speeches, all HDSB students in grade 7-12 will receive an email to vote for their two preferred candidates. ⁣ ONE SCHOOL = ONE VOTE: the candidate who wins the most votes in a school (elementary or secondary) will become that school's vote. ⁣ (This means that out of the candidates running from MD and other schools, only one person will be MD's vote for Student Trustee) ⁣ The two candidates who receive the most and second-most votes across Halton will become Student Trustees for 2020-21. ⁣ (If you want to see Student Trustees from Milton, you should engage as much as you can with Grade 7 and 8 students in Milton as elementary schools count as 1 vote too!) ⁣ We will certainly keep you updated and informed as the campaigning continues. Stay tuned for candidate interviews and more!
CALLIGRAFFITI⁣ ⁣ Last week, several of Mr. Sumner’s Grade 11 students put up a temporary installation displaying their recent work at the Milton Welcome Centre. ⁣ ⁣ Their work is in a style of art called calligraffiti which uses different written forms of language as the basis to create a piece. Calligraffiti blends modern graffiti and street art with classical calligraphy letterforms to create distinctive and personalized forms of art.⁣ ⁣ Mr. Sumner had his students begin with choosing a word and language that had personal significance to each individual. Their next step was to begin to break down the words into individual calligraphic strokes, and use each stroke to produce unique designs and create abstract calligraffiti pieces of art.⁣ ⁣ The display will be at the Welcome Centre until March Break when it will be brought back to MD and placed in the Library. ⁣ ⁣ Be sure to check them out at either location and support our artists!
Here’s today’s sports scores. We’ve added a poll in our story. Take a look!