For fifteen years, Women as Career Coaches has been inspiring high school girls of Halton on the path of discovering their careers. It is organized by Halton Industry Education Councill and entirely funded by sponsors. Over $31 000 was raised for this year’s evening at the Burlington Convention Centre on Thursday, March 21st. A record-breaking 700 people attended this year adding to the sum of over 4000 mentors and 4800 students who have attended in previous years. Milton District was one of the many schools lucky enough to attend this year, and everyone left with something to take with them. The trip was open to anyone in the school who wished to come and was entirely free to anyone signing up.

Students who were involved with co-op in either semester this school year made up a majority of the attendees, but Mustangs of all types joined in for this uplifting evening. Photography, special education, and co-op teacher, Ms. Talarowski was a champ at planning the event for over a month before the big day. Things couldn’t have gone smoothly without her. 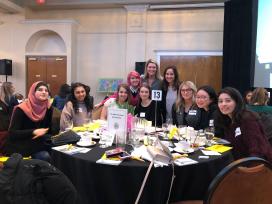 The night kicked off with a free buffet funded by Cogeco with vegetarian-friendly items, a veggie tray, and delicious bread. For dessert, there was a beautiful fruit tray, and even fresh cookies brought straight to the tables later in the evening. Before the function began, there was a station where anyone could cut out shapes for the annual mural that an artist would construct, although there is yet to be a photo released of the finished product.

Many respected community members attended or sent a message if they could not make it. Prime Minister Justin Trudeau sent a personal letter for the evening giving his respects to this phenomenal cause. The mayor of Burlington gave a speech and the MP representative sent a video from Ottawa giving her apologies that she could not attend. Veterans of WACC who have been volunteering all fifteen years were all smiles to be returning for another year as well.

WACC is successful for many reasons, one being the way it is set up. Six girls from a variety of Halton schools are seated at a table along with four of the volunteer career coach mentors. The coaches and students each share their stories, but the coaches with all sorts of careers give advice about success and happiness as a woman in the workplace. There is a bond formed between these strangers in only three hours, a majority of the girls only knowing one other person at the table at most. It is a magical experience, and often business cards and social media are exchanged at the end of the night. Even though some will never see these women again, the memories will last a lifetime. 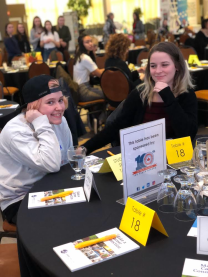 Five spotlight panellists stole the show with inspiring stories and themes. They spoke about passion, perseverance, and how they overcame the obstacles and failures of their own on the road to success. They asked questions generated by the audience and gave uplifting advice that could apply to all walks of life. Their diverse experiences allowed each girl attending to be inspired by a woman like them.

Sandeep Soni is a refugee who has over 20 years of technology and fought her way to a senior executive for a large tech company. She is passionate about her job and travelled a rough road to get where she is today, that including a language barrier, a non-transferable education from India, and even nearly getting deported back to the country she escaped from. Her story was phenomenal and moved everyone in the room. Sandeep taught everyone not to give up even when it feels like the world is turned against you. “If I can do it, you can do it too”.

Jess Parmenter is a mechanic who despite having one arm moved her way up in the world and now loves her job more than ever before. She was hilarious and smart and has a story that teaches that in this generation, it’s ok not to stick to one career path or with one job for a lifetime. She used to be interested in crime and forensics and now works with machinery. Many told her that she could not do physical jobs with her disability, but Jess countered that by doing everything she could possibly do and let her decide what she was not able to safely do. Jess proves that anyone, abled or disabled, can do what they want to in life and in their career if they put their mind to it.

Julie Cole (@juliecole) is the entrepreneur behind Mabel’s Labels, a mom of six who created a product that helps thousands of moms every day. Sixteen years ago, Julie was a lawyer, but with six children, the hours became too much and she opened her own business with a trusted partner and it was a huge success. Julie’s message was to find a job that you’re passionate about, and if not, make one! Anyone can be an entrepreneur with a skill and some hard work, a career path that many highschoolers overlook. Julie is a strong businesswoman leading a successful life as a mom, too, and she wants everyone to know that it is possible to be both and happy too. 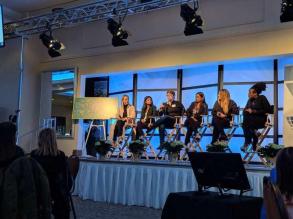 Riya Karumanchi (@riyakarumanchi) is the youngest ever panellist in all fifteen years of WACC. At fifteen years old, she is the CEO and founder of her own company and is an advocate for using technology for accessibility and other problems in the world. Her story and what she has accomplished at such a young age dropped jaws all around the room. Her company is called Smartcane, and her idea was born when she saw her friend’s blind grandma struggling with the outdated technology of the white cane. Riya had an idea to make a technologically advanced cane with object detection, GPS navigation, and more. With the help of others and lots of failures, she made her idea a reality. The main message that she was driving is that in a career, there will be many “no”s, but it is important to build off of those “no”s to finally get the satisfying “yes”. Many of the girls in the room who are looking into a future with technology were beyond inspired by Riya and her accomplishments, and all were impressed. Riya believes that there is a solution to every problem and that we are all capable of solving these problems with technology and helpful people at our side. Learn more about Smartcane here.

Shae Invidata is a real estate agent and a TEDx speaker and has done amazing things for human trafficking activism around the world. When Shae briefly studied in Hawaii, she saw cases of trafficking young girls on the streets leaving her in disbelief that these sort of things could possibly happen in North America. Over 30 million people in the world are slaves or are being trafficked at this very moment, and Shae was not going to sit back and let this injustice continue. She started a non-profit organization called Free Them, something she never saw herself doing in her high school years. Her message to the girls in the room was that their passion will likely change within five years, and that is ok. They will meet failures in their future, and that is ok. Going where life takes you is better than sticking with a miserable job for years, and the obstacles are part of the journey.

Each speaker was equally inspiring in her own way and made an impact on every woman in the room. It’s no wonder why nearly every attendee left with a smile on their face.

For more information on Women as Career Coaches, visit their website here.

Men as Career Coaches will be hosting their 10th annual event on April 25th and any Milton District student is welcome to attend. Contact Mr. Kokerus if interested in being a part of this inspiring night. Students must register online as well as sign a form with the school, and anyone looking to volunteer as a career coach can also register online.