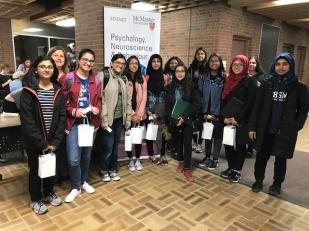 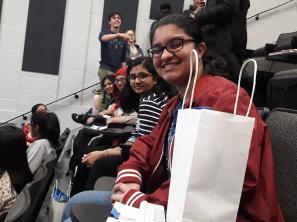 After a year of many long, studious hours, a group of determined Milton District students decided to brave the waters of neuroscience and participate in the McMaster Brain Bee at the Hamilton McMaster Psychology Building on Wednesday, April 10th. The McMaster Brain Bee is a competition aimed at encouraging and introducing adolescents across the world to neuroscience, the science of the brain. MD participated in a regional competition for the Brain Bee; the winner of the regional competition would advance to the national levels and compete against students all across Canada to represent the country at the International Brain Bee, held this year in Daegu, South Korea. Schools from all around Hamilton joined the extensive competition, which included a 50 question multiple choice section and a 15 question short answer section. For the final round, the top three students so far in the competition would be announced, and answer ten spoken questions verbally in five minutes. MD students showed great enthusiasm and preparedness for the competition, and although we were unable to advance to the final round, it’s certain that we’ll bounce back stronger and brainier than ever next year. Good work and good luck, students, and special thanks to Mrs. Richardson for coordinating and supervising the trip.

⬆️ THURSDAY SCHEDULE ⬆️⁣ ⁣ • Cafeteria food unavailable⁣ • Breakfast Club open from 7:30 - 8:00 AM⁣ • Free Hot Chocolate in Caf from 8:00 - 8:30 AM (bring your own mug)⁣ • Exams begin at 8:30 AM⁣ • Library opens at around 10:45 AM for quiet study; Caf always open • Buses run at normal times⁣ ⁣ YOU ARE AWESOME!
Tomorrow is the first of this week’s two Mustang Mornings. Bring a reusable mug to the caf to get free hot chocolate during this time and catch up with your outstanding work!
We’ve got a new format for Mustang daily sports scores. What do you think?
JUST ANNOUNCED: Next week on Wednesday and Friday, MD will be following a Mustang Morning schedule!