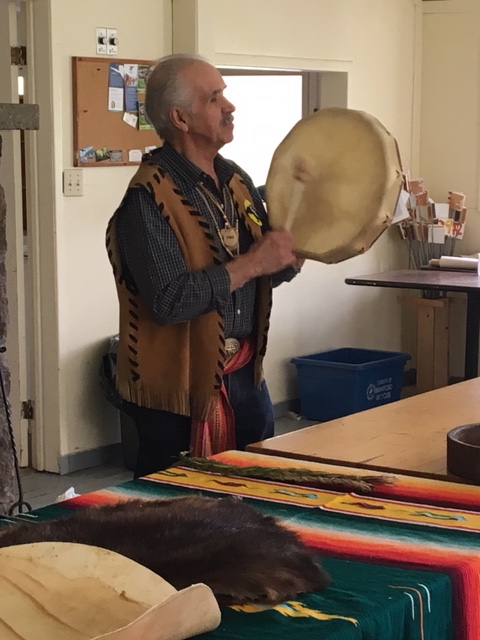 On May 16th, two busloads of NBE students enjoyed a glorious outdoor day at the Grand River (thanks to Ms. Compton-Morgan) and the weather was perfect!

For the first half of the trip, students were indoors to learn about Indigenous traditions from Leon, a Metis-Algonquin from Quebec, and his wife. After learning about and taking part in a traditional Smudge Ceremony, students and teachers learned how sacred drums are made and played them in a circle dance. Students were also able to learn about different hides and skins, and what they’re used for.

Following this session, the students moved on to the outdoors part of the trip, where they were separated into groups of three. While on a hike, they learned about many medicinal plants, edible plants, and poison ivy – don’t eat that. Many students had never seen a trillium before (except on their Health Card). During the hike, the groups had the chance to fill their water bottles in a natural spring. In their groups, students were given the challenge of starting a fire and to keep it going long enough to hardboil an egg.

The blue heron nests were a highlight for so many of the students and teachers who had never seen them! They were told the herons sound like dinosaurs at night.

Many kids sang on the bus, and teachers were pleased that they didn’t see a phone out all day (except for taking photos).

The trip was such a healthy, relaxing day full of great learning from an Indigenous elder, which meant so much to the NBE kids.

This was the first year the trip to Grand River took place and teachers hope to make it an annual excursion.