She shared her knowledge about certain Anishinaabeg traditions such as stating the phrase Mitakuye-Oyasin (pronounced mee-TAHK-wee-a-say or Mee-tah-koo-yay Oh-ya-seen), meaning “in my relations”, after spending time with the community.

Robinson explained the meaning behind this beautiful phrase; it shows how all living things are connected, whether human or nature. She talked about the diversity of Indigenous people across North America and how everyone is related in some way.

Robinson also talked about treaties and the injustices Indigenous people face when it comes to Canadian law.

For example, there is a gold mine located right in the middle of Anishinaabeg territory. However, the Ojibwe people there do not receive any of the profit from it. 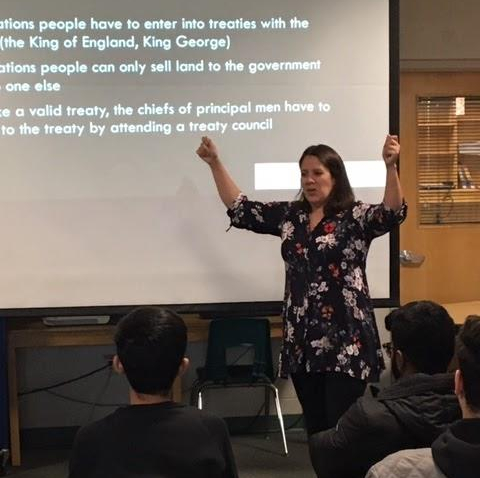 The Doctrine of Discovery, established in the 1400s, stole land rights from the Indigenous as they were not Christian. This kind of thinking is thought to be something of the past, but it in some cases remains relevant today.

It’s important to remember that treaties are international agreements; they are agreements between nations—not municipalities or provinces.

Robinson also brought in wampum shells which were covered in deep shades of purple.

Numerous tiny fragments of these shells are woven together to form what is called a wampum belt. Wampum belts have many stories associated with them.

The Two Row wampum belt, for example, consists of two rows of dark purple beads on a traditionally white background. This symbolizes peace and friendship between the Haudenosaunee and Europeans.

The two rows resembled both parties rowing down the ‘river of life’ side by side—each party focuses on their own goal without getting in each other’s way.

The Dish With One Spoon wampum belt is a treaty between the Anishinaabeg, Mississaugas, and Haudenosaunee that symbolizes the importance of sharing.

During Robinson’s presentation, the Grade 11s learned many new things that they will carry with themselves for the rest of their lives. They will, after all, be the leaders of the future, and hopefully implement some real justice when it comes to Indigenous peoples and treaties.